VIP-024 Migrate all USDT and USDC > 1M to separate markets

I am okay with sacrificing to not kill the platform and waves in general.

i’m just not okay with sacrificing everything, when other people is making bank on my sacrifice.

This offer will simply kill Vires holders. What will happen after it passes:

But I want to remind you that it was gVires holders who agreed to lower the maximum interest on the loan from 80% to 40%. This was done for the sake of protocol in hopes of solving the problem. Is this the kind of solution we deserve?

If the current proposal is accepted, it would be evidence of manipulation by the team. Because people won’t shoot themselves in the foot. Especially those who have invested heavily in the protocol. I vote against it.

In essence, i dont see the price of the vires token drop that low just because there are people who want to buy them (i, for example), also with the prcie of $10 it will be much more affordable to buy 1000 tokens and create your own proposals, which is nice, and since this proposal doesnt increase that amount significantly for me it sounds like a clear indicator that the team doesnt expect the price of the token to drop that low.

Thank you for your reply, art_artemev. Indeed, for the most part, my calculations are based on my assumptions. But, they are not unfounded, and here is why:

For gVires owners, the current proposal forms a big risk that could result in losing 80% of the deposit. You correctly noted, we don’t know how the price will behave. But we have to consider best-case and worst-case scenarios. Let’s estimate the cost of the trade-off in this matter:

Considering that the maximum percentage was lowered from 80 to 40, and will now be lowered even more, that’s a very small amount. Plus, they won’t have to pay any interest later on. So let gVires holders have a choice! Withdraw now with a 10-20% loss or wait for better times for the Vires Protocol.

I really don’t like being talked down to, so let me respond in kind.

What a joke reply.

It would be interesting to calculate though how much gVires can be unclocked daily and how much (in best and worst case scenarios) will be loaded to the DEX daily, that would indeed give a piece of valuable information regarding the risks. I checked data from the smart contract and calculated the daily unclock using the following code:

Which resulted in around 1500 vires unclocked every day from 5646 accounts. There are accounts with huge amount of vires which have a ton of vires unlocked every day, and there are small ones. To give you a better picture, from these 1500 unlocked every day, if we take TOP N from the “unlockedDaily” sorted in reverse order, then we will get: 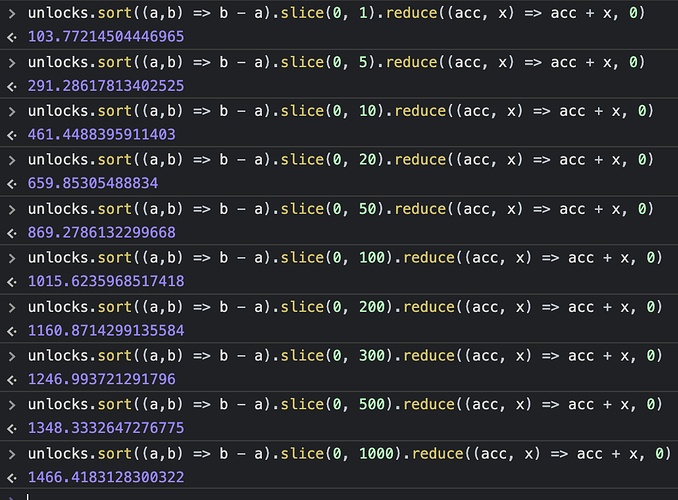 I may guess that TOP 10 or even TOP 20 are accounted of the team, so we have 840 vires unlocked every day. Now it is up to you to decide how many will decide to sell their tokens every day if the proposal will pass. I have absolutely no idea which percentage will decide to do so, but we may take 10%, which is 84 vires. Sounds like not a lot but it may definitely put pressure on the vires price, but i dont think too much,

Too many Pointless bullshits.
By accepting this proposal, we can resolve liquidity squeeze in USDT USDC so fast without any losses of smaller depositers.
Whale can be killed, it contains Alameda who deposited 90M $ to brake USDN.
Let’s kill fudders.

I didn’t want to reply to this proposal as this protocol seems so corrupted that it’s pointless.

But I’ll just say this, markets are bad, people have lost money in many other Defi projects. It’s normal that eventually Vires value will drop just like the market.

If you can’t see how unethical it is to create a way to lock people’s deposit, then destroy the APR, you don’t need a finance or coding class. You need an ethic class.

When you make a decision always ask yourself: if people knew who I was and I could be held accountable, would I be in trouble in real life for my decision? If the answer if yes then I shouldn’t have to explain further.

So far instead of saving the protocol most proposals protect huge accounts, protect a failed stable coin and attack directly those who provided liquidity to the protocol in the first place.

I want to leave comments here that I sent to the Vires.Finance chat. In particular, I want to respond to some of the user comments.

We want the project to live! But we don’t want to die ourselves for the project!

Now the big question:
Can we make sure that we don’t trample on those people who trusted the project the most? Is it possible to accept this proposal with less blood? Obviously, it can.

There is no doubt that the price of Vires will fall substantially after the pro-poseal is adopted. I’ve already explained why I think so and there’s no denying that possibility!

We need to give gVires owners a choice: Take a ~20% loss after selling Vires right now or wait for a better time for Vires. In my opinion, it’s a choice between a 20% loss and an 80% loss. But I guess there are people with different opinions.

Every two weeks, Sasha Ivanov pays 7.5M in interest. This amount should be quite enough not to kill the owners of gVires!

It is worth noting that this decision will not have negative consequences for people who have usdt/usdc deposits on Vires. On the contrary! It’s faster acceptance of the current propoozal, faster resolution of problems, it’s user loyalty, it’s an increase in trust in the project. We need to think and act in this direction. Even those users who can get out at the current (fair) prices - they will come back if you don’t wipe your feet on them.

How to do this?
If one considers this suggestion necessary - one can do the following:

That way whoever wants out will get out. This will not cause the price of Vires to collapse (since the exchange will be done through a sk). And these people will not interfere with a new vote in any way (for there is nothing to participate). And who decides to go back - probably will smooth out a little fall of Vires due to fall of yield.

Let’s not guess whether gVires holders will die or not. Let’s make it possible to make a choice!

UPD: If you fear the pressure on the USDN rate - you can provide a period of unlocking funds from the early sale of gVires. Also, we can discuss the possibility of exchanging for other tokens, for example eurn, waves, pluto, etc.

The issue is that Vires and gVires and not losing value because of natural market forces; they are losing value because everything is centralized around doing what Sasha wants. People are afraid to buy Vires even at 130% APY because of situations like this one: at any time Sasha can come up with a new proposal that wrecks the token, and people are locked into their tokens, so they just have to accept it.

This post was flagged by the community and is temporarily hidden.

You can’t use the stalemate of the gvires holders to make any change without giving those who want to exit the project at current prices, especially in a case like now where the risks are very high. And other users too. Why hopeless? It takes 2 years to fully, 100% unlock gvires. If the team and other users are so confident in the need for voting, in its positive impact on the situation, why don’t they give the holders of gvires the opportunity to leave the project ahead of schedule? After all, from their words - there is no danger. Here lies the contradiction. It must be allowed. I vote against.

Another proposal to rob the regular vires user. When will Sasha learn that bs like this is exactly the reason the situation doesn’t resolved. Again and again the waves team proves to be untrustworthy

Who is to blame for the fact that Vires.Finance is in crisis? Gvires holders?

gVires is a governance token. How do you want to make changes to the protocol without the consent of the gVires holders?

You seem smart, why not buying Vires, lock them for 2 years and vote ?

Kind of think Sasha might be annoyed with the Vires team. Bailed the team out and after almost 3 months they just can’t stop making proposals prioritizing whales/themselves. Perhaps vires needs a new DAO or maybe no DAO at all.
What do you think about just clearing the dead whale and re-establishing pre-April parameters? All of these measures were supposed to be temporary.

You don’t know any information about this proposal.
Too XXXX to vote.

If you clearly know about this situation , protocol and finance, your emotion won’t be out for this place…

Some shills on Telegram have been suggesting to distribute (steal) the unlocked Vires tokens from the 3PEE account as compensation. This idea would result in each current Vires token being worth about 73% of its current value—exactly why gVires owners are voting against this proposal! No one wants this. We have been very clear about what is proper compensation: INCREASED PROTOCOL SHARE. It is currently 10% for every market, and it needs to be higher to get gVires owners to agree to this proposal.