The Liquidity Squeeze: Plans and Roadmap

In this post, we recap recent events, discuss next steps and propose the larger-scale protocol updates to prevent similar scenarios in the future.

On April 02, a massive withdrawal of USDT and USDC from a few addresses (~150m) resulted in a liquidity squeeze: there were no available assets to borrow or withdraw. A relatively massive exit caused a great deal of uncertainty in the markets. 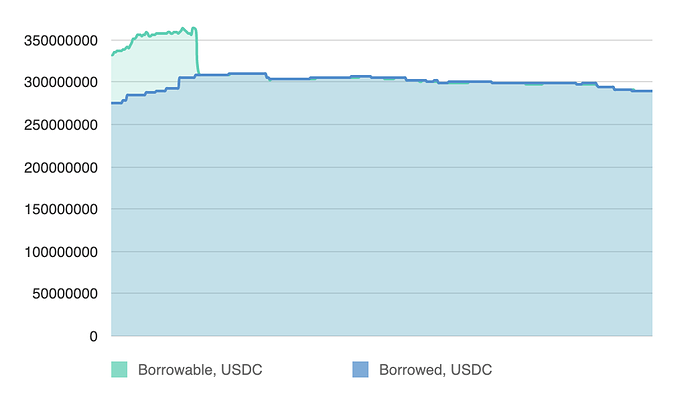 1030×626 21.5 KB
A few days ago, Vires DAO supported the proposal to impose daily withdrawal limits on USDT and USDC markets. Although most of the accounts supplied amounts of funds lower than the established limits, the withdrawals don’t happen at scale. As a result, it relieved the markets surge: new deposits and repays are now visible, as large withdrawals can now be processed gradually, not instantly.

The problem of limitless lending and borrowing

The more significant issue for all pool-based lending protocols is the limitless nature of those: at any time, enormous amounts can be withdrawn or borrowed(given collateral provided). Although the model is statistically stable, it doesn’t account for extreme scenarios.

As no one borrows assets just to store them in the wallet, waiting for a bank run to repay instantly, this creates several risks for all protocol participants:

Lenders can still sell their positions on the open market by exporting their LP tokens and trading at DEXes. Still, the massive liquidity exits(and borrows) need to be controlled.

“Bank run” is not something one can effectively react to(probably except for withdrawal limits): there just can’t be a “bank run reserve fund” storing 50-70% of the whole market “just in case”.

However, what can be done is to adjust the protocol to prevent it from happening. Here’s what we have in mind:

1. Limits to automatically turning on at extreme market conditions

If a market utilization for asset A exceeds a certain threshold(say, 95%):

Once the utilization is back below the threshold, the limits are off: borrows are open again, and withdrawals are available without restrictions.

The idea is simple: governance tokens for locking LPs(VIRES_USDT_LP, VIRES_USDC_LP, etc). This will guarantee there’re at least some assets in any market that will not self-inflict panic by attempting to exit immediately. Of course, there needs to be a reason for a lender to lock funds in a fixed-term deposit rather than being able to access it at any moment, and the answer is adjusted tokenomics.

Here’s how we see it:

In the upcoming several days, we expect corresponding proposals to be prepared for the measures described above.

Will it be auto unlock after 3m and I have to relock manually. With the option to reset the timer in-between. So say after 2 month I reset to 3 months

Ore can I just lock for three months and have it available on time after that?

There is still the issue of lack of willingness to supply, because potential suppliers do not want to deal with the risk of USDN that is hard-coded to $1 as collateral. You cannot have a functional lending protocol where the collateral is not valued at market price.

Basically that way borrower will have to not just add liquidity to increase health to prolong borrowing but need to repay whole debt to borrow again otherwise will be liquidated by community. Also that way protocol will be more a live and we could see more liquidations on a regular bases.

Just remember that it is the borrowers who take the biggest risks and pay for everything here.

reset is ofc can be possible; adding any amount(including 0) can reset the timer.

Good idea, maybe mode detailed modelling can do the job. It’s not exactly clear though how it fits supply-many borrow-many model. Which are to be liquidated? What order?

I like this concept. The circuit breaker described in the first part closely mirrors a suggestion i made earlier. LP token locking is an excellent idea and will add to stability.

I realize that this concept is part of a process and not intended to fix everything all at once. However, i would like to point out an existing vulnerability not addressed by the above changes: if any (not just USDN) of the listed stablecoins depegs below their associated collateralization factor, it would enable actors to deposit the depegged asset and borrow funds in excess of the value of the collateral. Collateralization Factors must therefore reflect depeg risks.

With point 2 I have doubts. I can see that LP tokens have one value greater to corresponding asset, so this negatively affects the interest earned (same APY, but lower supply). And other question: Can this value change (go down) when I decide to import/redeem them again in the future?

I think the APY was reduced for borrowers and suppliers to give oxygen to a large debtor. Since we’re helping that debtor, we should be rewarded with a spread of vires. Maybe those of that borrower, since he did not stop earning vires at any time.

Anyway I was following other assets that didn’t have the APR limit at that time (BTC and ETH), they reached 100% too, but for a short time. As soon as the APR went up a lot, the liquidity arrived. So I don’t know if the solution is that complicated.

Question: Would the currently locked gVIRES be allowed to be converted into LP VIRES-USDC or will we have to wait until it unlocks to be able to provide the LP?

Considering the above is yes, could there be some amount (if not all) from the currently supplied USDC/USDT that could be added to the LP VIRES-USDC/USDT pool using the currently locked gVIRES?

The user also has 87,000 USDC currently supplied which can only currently be withdrawn at 1k USDC per day due to the liquidity squeeze.

The user then would “approve” that all (or a portion) of the currently locked gVIRES be automatically unlocked from governance and the equivalent of that amount in USDC also be reduced from the current supply total, and become locked LP VIRES-USDC.

Say if the user chose to do that with 30% of his locked in governance gVIRES, or 3,000 gVIRES his funds would look like this after the change:

I’m asking cause I understand this would not bring any additional liquidity, but it would incentivize the current suppliers that have been faithful and have locked their VIRES in governance to continue to commit, at least a portion (if not all) to a period lock in LP, which should help since there would be less withdrawing liquidity.

The real issue, is that someone is playing central bank… Capping interest rates, have never worked for them, why the fuck would it work here?

" * borrowers can’t rely on prognostic rates: borrowing at 20% and suddenly ending up with 80% is quite a stress for any strategy."

This impulse reactionary adjustments, that fucks the suppliers and rewards borrowers for taking the dumbest risks. Ya’ll too arrogant.

I’m pretty much in agreement. I just got in today looking at the APY at 42%… instantly regretting it. Should have done more research. The most OBVIOUS thing to do in this case is to raise interest rates on the borrowing. Doesn’t even have to be much. Someone else proposed 1% per day til an equilibrium is reached. Duh. Why aren’t they doing that?

The fact they aren’t makes me think something not so legitimate is going on behind the scenes and I’ll also be getting out as fast as I can. Fees going to eat me up, but that’s better than losing sleep.

The fact they aren’t makes me think something not so legitimate is going on behind the scenes and I’ll also be getting out as fast as I can.

I mean… It wasn’t suppliers who voted to cap APY for borrowing. The proposal was almost rejected, the someone bought who knows how many Vires to vote for it. Like, obviously is was someone in debt, who considered it cheaper to cap APY with the extra expense, than to keep paying 100%… Only took like 30 - 50k usd tops, to get enough voting power… Against a few hundred thousand daily interest, probably paid off right away too with how it instantly paid 2% of lock as USDT and USDC.

With that said. I bought a ton of cheap supply on DEX as well. Cuz, well… I’m sure I’ll be able to import it eventually… This just a minor setback in my eyes… Hopefully I get some cheap vires too. <.<

There’s some other things that I don’t like either. I was trying to do research before investing but there is no discord community to talk with and it’s a lot to figure out. Couldn’t find anything about WAVES coin’s tokenomics… The WAVES discord has no action. Vires doesn’t even have a discord. So many red flags…

Item 2 is interesting, as well as emphasizing token vires.
It deals with only 1 plan (3 months), but since the entire reward pool will be directed to a single passive earning method, having a set of plans with different ratios may increase interest.
For example flex x% plan, 3 months y%, 6 months z%
so the investor can choose which is the most convenient and appropriate in the interest of participating in the system.

And item 1 is almost making perpetual what was voted to be temporary, with minor changes, and considering that if item 2 is approved half of item 1 is unnecessary.

There are 3 telegram channels for Vires: English, Spanish and Russian.

It’s right on the site…

Uh… where’s the plan to incentivize unwinding the massive borrow positions so that debts can be repaid? Do we just not care about that?

Not that hard finding info on waves… They post most things on Medium, and there’s plenty telegram groups.

Regarding proposed idea: supply-many borrow-many (times) scenarios should be covered by different sets of borrowed funds with dedicated deadline, so for every borrow there needs to be deadline selected and shown - separate repay as well. Liquidations could occur also based on every borrowed set based on deadline (so if 2 borrowed sets were created on same day with 5 hours difference so first 1 could be partially liquidated 5 hours before second).

Once again - partial liquidation is key issue here even if health is high.

The idea is good, but I don’t see a good strategy to avoid bots getting all the liquidity whenever borrow hits 95%.