A proposed solution to liquidate liquidity crunch once and for all. 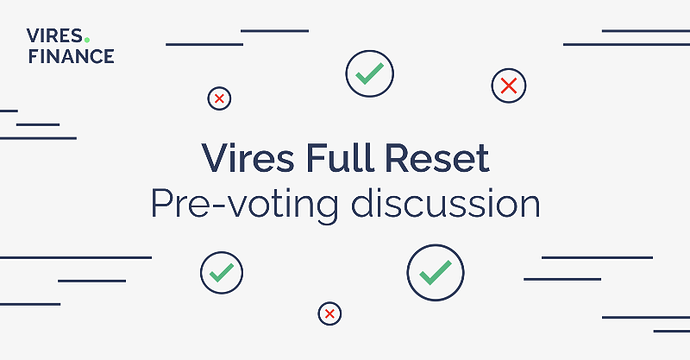 After VIP-026 passed with more than 75% of the community in support, the proposal was implemented and $1M USDN was vested daily into depositor accounts. On Thursday, August 25th, USDN depegged from the dollar for a fourth time, and dropped below an acceptable range for about 33 hours. The depegging event stopped thanks to the Vires team’s swift actions to pause vesting and protect depositor’s interests.

Unfortunately, the market reset enacted by VIP-026 didn’t go far enough. The components of the proposal have created new problems instead of solving old ones:

As the situation evolves and new problems develop, we must continue to act and adapt based on community input. The team’s role is to generate potential solutions for the community to consider. The Vires team believes that the current market situation and loss of faith in the DeFi industry triggered by the Celsius bankruptcy, 3AC insolvency, Tornado blocking issues, etc, set the stage for a meaningful change in our strategy.

Vires’ strategy up until now has been: Improve Trust > Improve liquidity > Sustain the platform. Through ongoing discussion and governance, we believe we have managed to restore trust, but due to macro market conditions, liquidity has not improved. The Vires team believes “Improving liquidity,” or in other words, attracting new depositors, is no longer the correct goal to focus on.

After much internal discussion, it seems that we’ve run into a critical flaw in how Lending protocols are built across DeFi. It is the same flaw seen in AAVE and Compound however, their pools of liquidity on Ethereum are far larger and able to sustain volatility generated by the flight of depositors more easily.

There are three options to solve these new problems:

Following from option three, the team wants to propose a change in Vires’ strategy to: Make all users whole > Get back to building > Sustain the ecosystem . Here’s what this new strategy would mean:

Give all users certain and full repayment of all deposits through the vesting system. Reduce the interest APR so that repayments and new liquidity can help to solve the problem. Defend the peg of USDN by giving users the option to support the stability of USDN by receiving all or part of their vesting amounts in SURF. Give locked LP tokens a way to get out before their locked period is up, so they are not locked into deprecated markets.

Get back to building

Create new markets on Vires that are better protected from a future liquidity crunch. We’ve already implemented adaptive withdrawal, borrow limits, and non-borrowable collateral. Part of this has become the new industry standard as evidenced by the adoption of Compound V3. Unfortunately, these upgrades, while not enough to solve an existing liquidity crisis will be more than enough to stop another one developing.

By refocusing team resources like development time and funding on the future progress of the Waves ecosystem, we can build more products and services that create value and attract users. Some of the projects set to launch in the next two months that would benefit from this include:

What this would mean for all depositors

What this would mean for all gVIRES holders

What this would mean for all LP Token holders

What this means for the Waves Ecosystem

All community members can give feedback on this plan, your feedback is what helps us build the right solutions. We’re always listening and evaluating your comments.

The coming proposal may not include all of these changes in one proposal, we could roll out the changes in phases or make them all at once. Some changes are more important for overall sustainability than others, with the priority being to reduce the base interest rate so that repayments can contribute to liquidity.

You can help improve this plan by joining the discussion and sharing your ideas here!

simple linear vesting is the all evil.
Adaptive vesting will be seriously needed.

I agree on adaptive vesting - tied to the market value of USDN.

Sasha locked 160,000 gVires with his 3PEE account, so it doesn’t matter how you vote. It will pass.

In this text I will analyze current situation and provide foundations for the following four proposals (of course, valid only as BR < 1): normalize SURF gNSBT swap power disable NSBT gNSBT swap power (yes, this swap power be set zero)...

Please consider the following for the new Vires protocol:

As an observation, there is an insatiable and irrational demand for crypto loans. There are also bad actors who will exploit any flaw, or spitefully cause damage for damage sake. Any new version must take unto consideration that not all participants behave rationally and that there are those that would do us harm, even at a financial cost to themselves.

Those who, like me, were blocked in the Vires.Finance chat - I’m waiting on my telegram channel Real Cryptamans.

How will the withdrawals be enabled if no new deposits would be accepted in legacy mode? Where will the money come from?

I’ve yet to take in this proposal in its entirety, it’s also difficult to form an opinion with much of the details still unclear.

However, the proposed penalty for unlocking should be scraped immediately.

This proposal is basically a forced exit of USDC/T suppliers deposit out of the protocol. Everyone is forced into the legacy market at 2% interest.

Unlocked funds can opt out voluntarily by converting to a vested schedule and convert to usdn/surf. Locked funds will need to unlock first and pay a penalty to do so.

Lockers originally signed up for a 90/180/365 day lock in the current market, they only accepted the locking period with the current apy. This would have been a strategic decision, speculating on the high apy and low exit liquidity.

If this proposal limits the apy, then the terms under which people locked their funds are changed. Which means the deal is voided from the protocol’s side.

Providing an option to unlock without a penalty and level the playingfield is only fair. Demanding to make a choice between keeping the lock at a reduced apy, or a penalty is immoral.

I don’t agree with this proposal and I will vote against it. If you force people to withdraw in USDN, USDN will depeg even more, since it seems even Sasha is selling USDN for basically any other token available.

As the best option I see this:

If you swap the USDC/T debt for USDN you are DEFAULTING the debt because everyone knows that 1 USDC/T is not equal to 1 USDN… you are also attacking users who have locked their supply contradicting passed proposals and changing the rules once again.

Moreover If you dump millons of USDN to the market (with a BR about 10% right now in the SC), the depeg would be enormous. Most of the users are going to sell with heavy loses

Of course this may be the end of Vires for sure. So I do not see any future for vire token following this path.

Good question… I was wondering exactly the same

Suggestions:
1-Do not force any USDC/USDT holder to choose ALL IN or ALL OUT option. If they wish to take 2% APY and stay in legacy USDC/USDT allow them to convert part of it to USDN on any particular day they feel like. This way you would mitigate mass USDN sell pressures which causes depeg. Users may opt in to wait till liquidity arrives and if they feel like they need a cash out, they should be allowed to convert any % of their legacy deposits on any day they like. Vesting would start from the balance of the day this is done with subsequent additions any time later. Everyone should be entitled to 1/365 of their USDN balance of each day and this should be guaranteed.

2-Please clarify what would happen to existing USDN deposits and how they would be treated. Will the APY on it be around 12% like right now or will it be 2% as well? Will there be one legacy (With vesting) and one normal USDN Deposit option (with no withdrawal limits such as right now) on Vires Account Statement. Also if one opts to convert all into USDN with 5% bonus in one chunk, will that account be able to do USDN lending at the going 12% rate or thereabouts.

3-Please clarify what will happen to BTC/ETH/Waves etc deposits. They should move to legacy as well given with THE GREAT RESET, no one will be able to borrow BTC ETH Waves etc for a while.

4-SURF conversions should be also flexible. On any particular day on any unlocked vest amount.

Example
1-Account has 10K USDC
2-Owner opts in to stay with USDC with reduced APY of 2%. Stays like this for say 10 days.
3-Then in Day 10, owner sees no liquidity coming so decides to convert some of the balance to USDN. Say that’s just 1000 USDC. On Day 10. Let that person convert 1005 (with bonus) while the remaining balance of 9000 USDC (plus the accrued 2% interest remains in the account)
3-On Day 11, the person should be able to take 1000/365 USDN from his/her account as per vesting schedule. He/she should be able to place this into USDN lending if so wishes. Or if he/she wants to buy SURF and say on that day Backing Ratio is 10%, he/she should be able to buy SURF at 10cents with the 1000/365= 2.74 USDN =~ 27.4 SURF tokens
4-User should be able to choose what to do with 27.4 SURF tokens such as stake it to Neutrino Protocol or add it to SURF/USDN pool on WX.
5-Say on Day 35, the Protocol owners added USDC liquidity bringing down the utilisation ratio to 95%, account holder should be able to withdraw 1000 USDC. His balance then will be 8000 USDC plus any accrued interest from 2% APY. Then on any future day he/she should be able to do any of the steps above.

LAST BUT NOT LEAST: Don’t rush this proposal. Take your time for a week at least and CRAFT A FEASIBLE SOLUTION/WORKING MODEL.

Those who have their LP tokens locked, will be able to prematurely unlock them to a regular deposit to start vesting, possibly under a certain penalty.

This is quite unfair. A locked token means the conditions are FIXED and that is why the option of locking tokens was created. If you change the conditions you may give the option to unlock the tokens without any penalty.

Which adaptative limits? There would be no more new deposits in the legacy market. Please explain

Depositors can select to start the vesting period in USDN at any time and receive a guaranteed payout in USDN daily plus a 5% liquidation bonus .

Please do not use ONLY the 1/365 vesting model for small depositors. Let users be able to withdraw the HIGHER between USDN 1000 or 1/365 per day

You cannot have so much USDN hitting the market at once. Instead of a full reset, reduce the vesting threshold from 250K to 10K. This would strike a balance between greatly reducing Sasha’s daily interest while also preventing too much USDN from being unleashed. Additionally you would not have to create new USDC & USDT markets from scratch; you would have the small accounts still there.

The Vires team needs to borrow USDC and USDT equivalent from investors or lenders and put their holdings of NSBT, USDN, WAVES, VIRES or the cashflow from WAVES exchange as collateral. Make every depositor whole.
So this will not stress the USDN peg in any way and you can start fresh.

Edit: There could be a mix 50% between the model above and USDN vesting or other percentage.

The (vesting) withdrawal limits should be based on the market price of USDN, since that is reason they were stopped, not the BR.

Obviously they should implement a similar concept as they do currently, where 1/365 or 1k is allowed to be withdrawn. Whichever is higher.